When one actually stops and thinks about it, light is one of the most extraordinary and fascinating phenomena in the world. It shapes everything we see around us, mesmerizes us with the way it reflects off of both clouds and rivers alike. The Amsterdam Light Festival has been celebrating this magic material’s use in art since 2012. It’s no surprise that Tamar Frank, one of the leading light artists in the world, would be invited to participate. 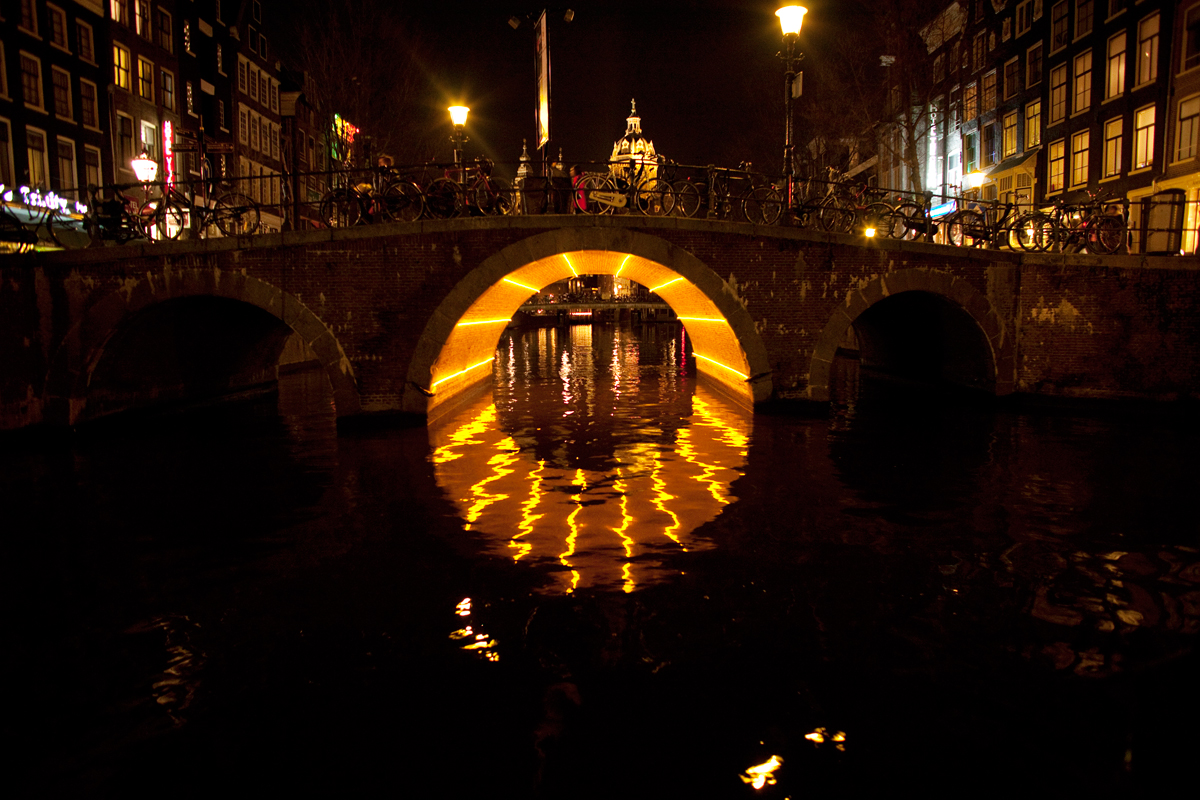 This reflection is an intentional and important aspect of how Frank’s light art piece interacts with the architecture.

The beauty of Light Circle was featured in the second edition of the festival in 2013. The piece was installed on an important and unique architectural feature in Amsterdam, the archway of a bridge. Moreover, this particular piece by Tamar Frank is in the Red Light District, a hub of pedestrian movement and tourism. The lights are strings of LEDs called Neon Flex, which bring attention to the iconic architecture of the city at a time of day when it is less visible. She echoes the theme of 2013’s light festival, “Building with Light,” by constructing a new shape through reflection.

This halo shape continually reoccurs in the artist’s work, for example in Flashing Lights at the Musee des Beaux Arts Dijon, France. It also points to this other world that light itself symbolizes, where the tangible and understandable supersede reason and form. Because the festival takes place in the winter months, days are quite short. During these dark times, the overall effect of Light Circle is enchanting and uplifting. When thinking of how art in public places can improve a city’s aesthetic, even seasonal and daily changes can be considered.

Usually at night things are not illuminated from below, imagine seeing this magic glow from above and investigating for yourself.

“The incentive is to invite the spectator to experience a heightened visual sensitivity and how this defines our sense of orientation. Many things go by unnoticed. A minimal change can draw new awareness.”

Without this artwork, passersby might only see a murky waterway and an ordinary bridge. However, those walking by during the festival were treated to a memorable sight, delicately changing with the slight movements of the water below. Nowadays, urban art should not only be thought of as murals and traditional metal or stone sculptures. Tamar Frank’s light art shows how newer contemporary styles of art can easily be incorporated with classical architectural elements.