In 2017, Tampa, Florida witnessed a master at work. This master was Eric Henn, who came up with some of his finest work for this Citgo oil tank mural. The beauty of large-scale tank paintings is that they brighten up otherwise industrial areas with a huge swatch of color and creativity. The places these tanks are located are usually absent of iconic paintings like “Oceans”, making these artworks amazingly well-received upon completion. Henn’s ability to work in epic proportions and his understanding of American culture have made him one of the best tank muralists around. He has realized so many extraordinary urban art projects across America, it is unbelievable how he continues to think up these never-before-seen designs. 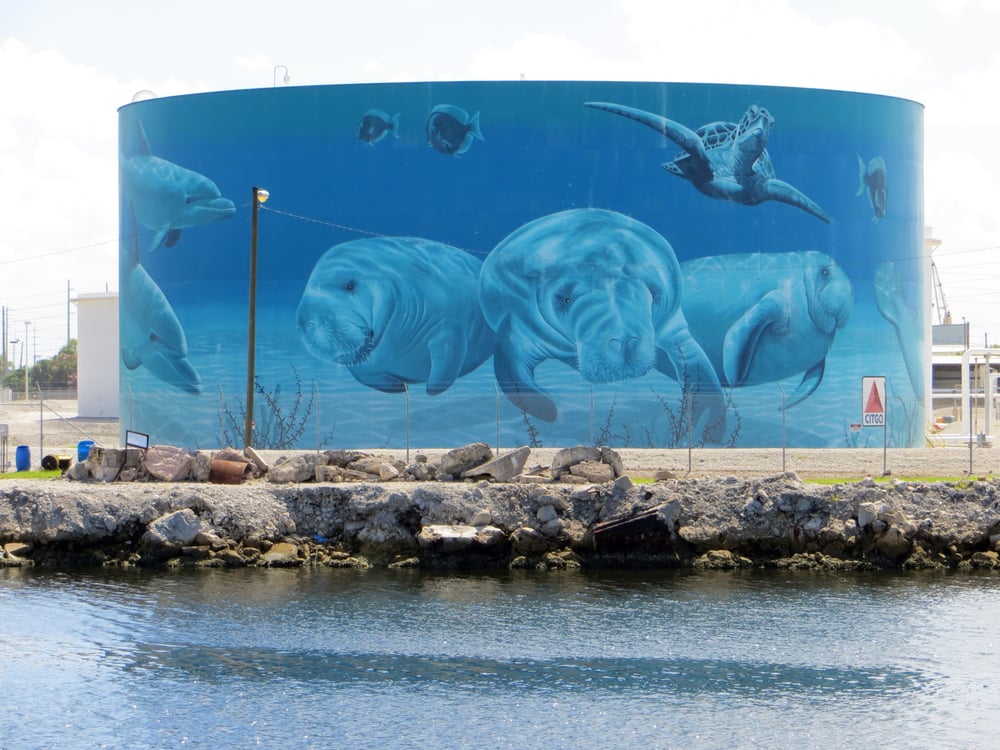 Dolphins, sea turtles, fish, and the loveable manatee all adorn this oil tank mural by Henn in Tampa, FL.

It is hard to fathom the daunting task of looking an 18,000 sq. ft. canvas in the face. That is effectively what Henn did when he took on the commission to create this urban art piece for the city of Tampa. He usually investigates what the city’s biggest source of pride is and represents it in his murals. “Oceans” is of course no exception.

The memorable blue underwater scene features manatees, an endangered species that the city has fought to protect. The rest of the sea creatures complete a nature scene that echoes the local’s appreciation for the surrounding oceans. The artist carefully planned the arrangement of the oil tank mural’s compositional elements to complement its round form. The result is that one of the manatees and the sea turtle above it seem to be coming right at the viewer.

Water is notoriously difficult to paint accurately, yet “Oceans” possesses a realistic rendering of this integral element of human and animal life. In the mural, light reflects off of and is diffracted by an uneven or slightly choppy surface, patterns are projected onto the skin of the animals and the ocean floor. The way these lines of light follow the curvature of the dolphin and manatee bodies adds visual interest and palpable perspective. 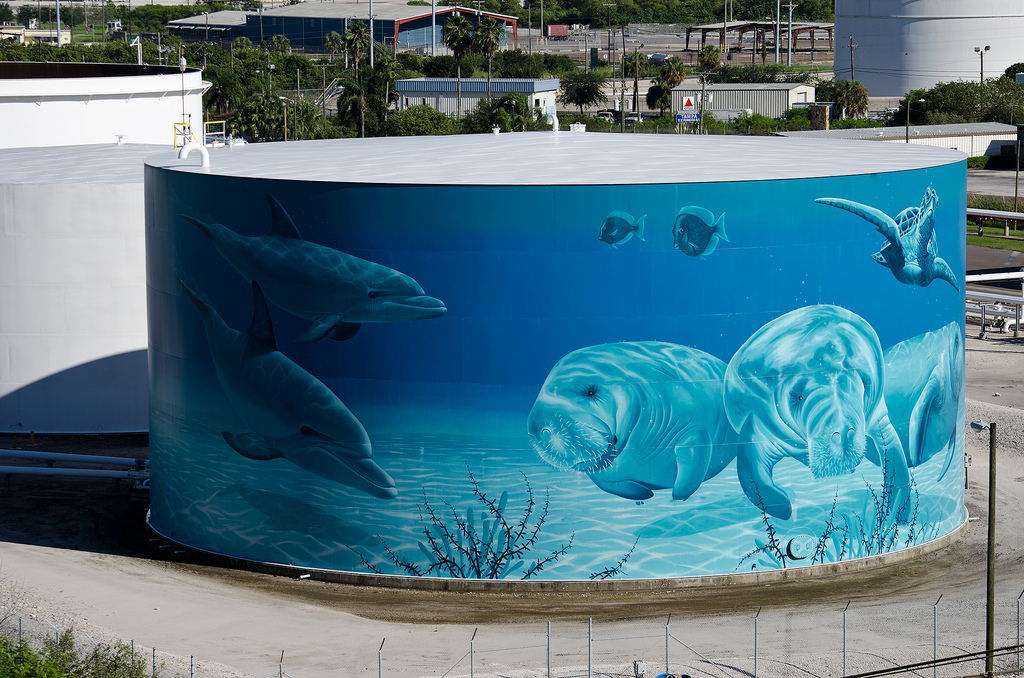 The diffracted light rays scattered along the bottom of the ocean are rendered with great talent and make the scene more life-like.

The oil tank mural “Oceans” is viewed by many people daily. The cruise ships dock and set off from nearby the oil tank mural, meaning all of the tourists aboard are greeted with the bright blue loveable sea creatures. The city of Tampa knew how important first impressions are; imagine a boat load of people arriving to your town seeing a depressing gray, industrial, and perhaps polluted, cityscape. Instead, they are welcomed by a reminder of why the city itself is special, for the magic one feels when gazing out at the ocean from the shore.

Art in public places must not only be impressing to tourists, but also treasured by the locals. Tampa residents have received the artwork with open arms, as it is an invitation to think about our impact on nature and testament of what makes their hometown so enchanting.